Posted on November 11, 2014 by theonceandfutureemptynest

Today, Veteran’s Day, we commemorate those who have served our country in the armed forces, those men and women who risked their lives to protect the freedom of others. The holiday itself cannot repay the sacrifices that it honors, and yet our observance of the holiday makes us remember and makes us pause in gratitude.  And that moment of reflection should make us follow foreign policy and be aware of world events.  What more can we ask of our sons and daughters?  Of the parents of those who serve?  In four more years, it will be the hundredth anniversary of the event that this holiday originally memorialized.  On the 11th hour of the 11th day of the 11th month of 1918, the Allied forces and Germany agreed to a cease fire.  This armistice began the end of World War I, the war to end all wars.  In 1919, President Wilson would proclaim November 11 as a day of commemoration.  But this was not the war to end all wars. 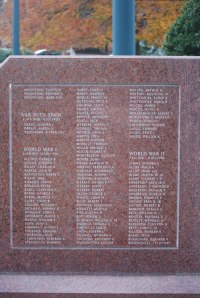 We know this. Each of us brings our own experiences to this day.  Some of us are veterans.  Some of us are the children of vets.  As a military brat, as a child during Vietnam, as a teacher, I have seen the fathers, brothers, sons of friends, neighbors leave for Vietnam, Iraq, Afghanistan.  Some came home changed by the experience.  Some did not return at all.  This is the nature of war.  Men leave; men die.  We may think of them in romantic terms—the hero against all odds in battle, defiant in the face of the enemy– but war is a messy place. Samuel Hynes’s new book, The Unsubstantial Air: American Fliers in the First World War has made me realize the pivotal role in American history World War I has played.

I confess that I bought Hyne’s book because of a research project I had done for the local library two years ago. The library had received some photos from the estate of a woman who had once lived in town.   Among them was a photo of people foxhunting.  “Try to find out if this is in the Litchfield hills,” I was told.  The photography studio was emblazoned on the back.  Several names were written in pencil including “Thomas and Louise Hitchcock”.  It didn’t take long to find that the photo was taken in Aiken, South Carolina.  While Hitchcocks themselves were an interesting couple, I was fascinated by their son, Thomas Hitchcock Jr, who left his prep school to become a fighter pilot in France, was shot down, captured, and escaped.  He was eighteen. He went on to attend Harvard, became an investment banker and died testing a P-51 Mustang during WWII.  More than one source listed him as the inspiration for the character Tom Buchanan in F. Scott Fitzgerald’s The Great Gatsby.  Were the stories of other WWI pilots as romantic?

Reading Hynes is like listening to a favorite college professor teaching a small seminar. He is informative, yet informal.  You need to pay attention to tone and diction because what seems like a amusing story of two young men having an adventure can take a tragic turn.  Theodore Roosevelt’s charismatic son, Quentin, finally gets to the front and is shot down.  Hynes uses excerpts from Roosevelt’s friends’ letters to sharpen the loss for us.  But the most poignant is a quote from Theodore Roosevelt’s letter to the novelist Edith Wharton:  “There is no use of my writing about Quentin; for I should break down if I tried.  His death is heartbreaking. But it would have been far worse if he had lived at the cost of the slightest failure to perform his duty.” (209) Hynes points out the sparseness in the young men’s retelling of their exploits. Their lists of dead friends, their understated diaries yet exuberant letters underscore the romantic nature of being pilots and the harsh reality of the war. One pilot who appears several times in the book, Alan Winslow, seems brave yet empathetic based on excerpts from his memoir written fifteen years after the war. And perhaps these qualities are why Hynes writes in the chapter “Afterwards”: “Alan Winslow was a different kind of war casualty.” (280) For some the experience is more than the mind can handle.

Reading these accounts of pilots during World War I made me realize how amazing their experiences were. The Wright Brothers had taken off at Kitty Hawk a mere eleven years before the start of the war. Aviation was new so new that planes became obsolete as pilots trained. Many of these young American aviators came from wealthy families and attended Ivy League schools. For them, flying was a sport. The war was an adventure. They were pioneering a new form of warfare, one that changes the future of other wars. The technology used in this war—both in the air and on the ground—was devastating. Today we read about guided missiles and drone strikes, suggesting that war can be a remote activity. Nevertheless the human toll is still there. 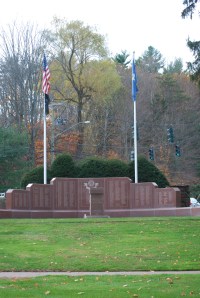 Today we honor those we lost and thank those who came back. Next year will be the hundredth anniversary of one of the most powerful war poems ever written: “In Flander’s Fields.” Written by a field surgeon after the death of a friend during the battle in Ypres salient, this poem is a moving tribute to all those who serve. I reprint it here as a reminder that war is both personal and distressing:

In Flanders Fields the poppies blow

Between the crosses row on row,

That mark our place; and in the sky

Scarce heard amid the guns below.

We are the Dead. Short days ago

Loved and were loved, and now we lie

Take up our quarrel with the foe:

To you from failing hands we throw

The torch; be yours to hold it high.

If ye break faith with us who die

We shall not sleep, though poppies grow

Transitions! Every couple has them: First newlyweds; then parents, then empty nesters. After raising three girls, our nest was empty--just my husband, myself, and three dogs. I taught English to middle school and high school students; my husband was a corporate drudge. Life was good. We went on vacations, had romantic dinners, and enjoyed the peace and quiet. Then a daughter came home. We relocated from California to Connecticut and found ourselves on new adventures.
View all posts by theonceandfutureemptynest →
This entry was posted in Uncategorized, Veteran's Day and tagged "In Flander's Fields", Jr, pilots, Quentin Roosevelt, Samuel Hynes, The Unsubstanial Air: American Fliers in the First World War, Thomas Hitchcock, Veteran's Day, veterans, World war I. Bookmark the permalink.