The House Where I Finally Grew Up

Posted on November 8, 2013 by theonceandfutureemptynest

We sold our home in southern California this week.  And by coincidence, last week my youngest sister sold her house, the one my parents bought 48 years ago.  I never think about my childhood home.  I lived there for eight years; four of them spent plotting how to escape.  On the other hand, the house we just sold was the house where we lived for 21 years, the house where my three daughters planned their getaways,  the house where we celebrated 21 anniversaries, 3 sweet sixteen parties, three high school graduations, and three trips to deliver a freshman to college.  It was also my escape hatch: if I couldn’t stand living in Connecticut, I had a place to which I could return.  I could return to my lair, get another teaching job, and resume my old life.  So it was with great reluctance that I agreed to put the house on the market.

We were lucky.  We got an offer the first weekend it was listed.  When we took the grant deed to our local bank to be notarized, their stereo system was playing Miranda Lambert’s song, “The House That Built Me.”  “Do you hear what is playing?” I asked my husband.  He nodded.  “The manager likes Miranda Lambert,” the notary told us, but I was fighting back tears and wasn’t paying attention.  I know the song is about a childhood home, but this house that I was selling was the house that built me.

The street at the rainbow’s end

This is the house where I grew up.  Admittedly I was already over thirty and the mother of three when I moved into the house, but in many ways, I was immature and naive.

In this house, I found my inner resilience when one of my daughters had a life threatening accident.  When my youngest fractured her skull in three places, I found I had true friends who would be there for me, the strength to sit by a child’s hospital bed, and absolute love for all three of my daughters.

In this house, I survived a natural disaster.  When the 1994 Northridge earthquake shook the house, we were stunned by the strength of the quake and the damage to the house.  But we were prepared.  We camped in our back yard until inspectors said the house was safe.  We had bar-b-ques in front of a neighbor’s house.  I managed the insurance adjustors, the contractors, and the massive paperwork from both.  I survived the reconstruction of the house, learning to make decisive decisions instead of depending on someone else to tell me what to do.

In this house, I learned to juggle motherhood and work.  After being a stay at home mother for almost ten years, I ran a small daycare from my home in order to help with the family finances.  Later I worked part-time for a local school district and a nearby university.  To put my daughters through college, I obtained a teaching credential and a full time job teaching middle school.  I learned that working mothers make sacrifices—there’s so little time for oneself and one’s children are the most important priority.

In this house, I made friends that I could always depend on for a laugh, a cup of coffee or a martini.  We went camping with other families.  We had neighborhood parties.  New Year’s Eve will never be the same.  I will make new friends but these will always have a place in my heart.

an empty house is not a home 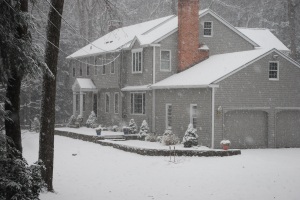 Our new house
All of the southern California photos were taken in December, January, or February.

Transitions! Every couple has them: First newlyweds; then parents, then empty nesters. After raising three girls, our nest was empty--just my husband, myself, and three dogs. I taught English to middle school and high school students; my husband was a corporate drudge. Life was good. We went on vacations, had romantic dinners, and enjoyed the peace and quiet. Then a daughter came home. We relocated from California to Connecticut and found ourselves on new adventures.
View all posts by theonceandfutureemptynest →
This entry was posted in adventures, Aging, changes, community, everyday life, Family, houses, moving, transitions and tagged adulthood, changes, daughters, mothers, moving, southern California. Bookmark the permalink.

3 Responses to The House Where I Finally Grew Up