Posted on September 23, 2013 by theonceandfutureemptynest

I have been absent from this blog for some time now. I confess that I have been distracted by two other writing projects that consume much of my energy (and creep into my dreams). I think of topics for this blog—the great doggy flu epidemic of 2013, observations of a small town library, fun afternoons with my grandson—but I never get to writing them because when I turn on my laptop, the other projects whisper: “Write me! Write me!” If you think I may have gone a bit crazy in Connecticut, you are so right. At least there are no essays piled in a corner, murmuring: “You know you have to grade us, report cards are due.” (By the way, dear teacher friends, the day you started back to school, I went on a thirty mile bike ride to celebrate your first day of the new school year. Happy New School Year! I miss teaching, my students and my colleagues.) I digress. The real confession here is that I am still weird, still talking to the dogs, to the computer, to my characters, and I’ve been writing fiction. 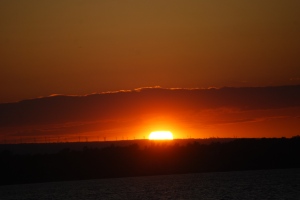 This blog began as a chronicle of my adventures in another part of the country—a place where ‘wicked’ means good and almost every town had witches in the 1690s. But I have acclimated. I now know: small businesses are closed on Sundays; liquor needs to be bought in a special store; vacations are taken between June 15 and August 28; church bells ring on the hour during the day; the post office line isn’t going to be more than three people no matter what time I go; I can use my town library card in any library in the state. When people ask me where I am from, I tell them the name of the town where I live now without explaining that I moved there from California. I’ve become an expert on the historical photographs in the town history room at the library. But some things remain uniquely New England to me. In our summer explorations, we camped at two large lakes, Lake Champlain in Vermont and Lake Sebago in Maine, and made a day trip to the Connecticut River.

Our trip to Lake Champlain was in early June. The campground was empty except for the handful of people who were ‘seasonal,’ living there all spring and summer (then heading to Florida for the winter). We had a view of the lake, which was especially nice at sunset. Had we stayed on the New York side, the lake would have been beautiful at sunrise. The campground was right next to one of the ferries that made frequent trips across the lake. Ferries are not unique to New England. While I have never ridden the ferry between San Francisco and the East Bay, my husband took it home after the Loma Prieta earthquake damaged the BART tunnel. But there was something fascinating about the ferry plowing through the water carrying big rigs. We did not take one of the big ferries across the lake but on a rainy day, we drove to Fort Ticonderoga. We went over the new bridge the links Vermont to New York, toured the fort and returned on the small Ticonderoga ferry. The ferry operators thought I was a bit crazy, standing in the rain, taking photos. 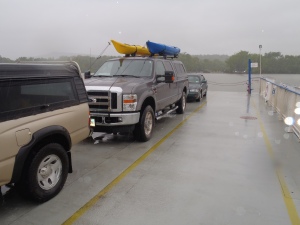 While Lake Sebago has a ferry, we didn’t take it. Instead we had an adventure going through the locks. We camped in a campground on Long Lake. Between Long Lake and Lake Sebago is the Songo River, a slow winding river. Long Lake, however, is five feet higher than Lake Sebago so in 1832, a lock was built to move boats off the Lake and onto the river as part of the Cumberland and Oxford canal. While this seems unique to someone who has lived most her life in a state where most of the natural lakes are small and far apart, there are locks in other parts of the northeast. Intrigued, we rented a pontoon boat so we could go through the locks.

Our adventure began at a marina in Naples on Brandy Pond, which connects to Long Lake. We cruised along the edge of the pond, admiring houses along the way, navigating a channel that is deep enough for boats. Finally we came to a stop at the road that goes into Sebago Lake State Park. The bridge was too low to allow boats to pass under it. We came to a stop and waited. Then we learned that the locks are still operated by hand. The road into the Sebago Lake State Park is on a pivot. A worker comes out and turns the wheel and the road goes sideways. The boats then glide through the open bridge and into the locks and the wooden doors are shut by hand. The water level lowers. Again the gears are operated by hand. The doors open and the boats float out. It’s like a Disney ride.

Our last adventure was a steam train ride from Essex, Connecticut to a river boat on the Connecticut river. This would be really spectacular trip during the Fall foliage, but even on a hot summer day, the views were fantastic. We splurged and rode in the first class car, a vintage Pullman car with swivel seats. There are steam train rides in other parts of the country, even California, but sitting in the swivel seats, while looking out the windows at the Connecticut River was enjoyable.

The river cruise gave us a new glimpse of Connecticut. From the top of the riverboat, we were able to see the Godspeed Theater to which New Yorkers once traveled by steamboat in order to see popular musicals. Musicals are still performed there today. We could also see Gillette’s castle, a spectacular fortress that was actually the retirement home of the stage actor, William Hooker Gillette. (Gillette is best known for playing Sherlock Holmes. His ad lib “elementary, my dear Watson” has become a standard line in other actor’s portrayals of Holmes.) 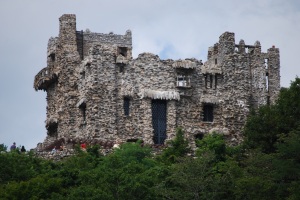 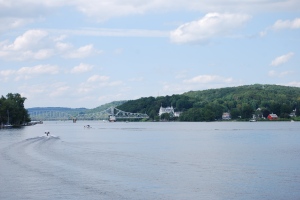 We are still finding unique things to do here in New England. Stay tuned for the continued adventures of a California couple in the state of Connecticut.

Transitions! Every couple has them: First newlyweds; then parents, then empty nesters. After raising three girls, our nest was empty--just my husband, myself, and three dogs. I taught English to middle school and high school students; my husband was a corporate drudge. Life was good. We went on vacations, had romantic dinners, and enjoyed the peace and quiet. Then a daughter came home. We relocated from California to Connecticut and found ourselves on new adventures.
View all posts by theonceandfutureemptynest →
This entry was posted in adventures, Life in Connecticut, nature, New England, photography, travel and tagged Essex steam train, Gillette Castle, Lake Champlain, life in New England, Sebago Lake, travel. Bookmark the permalink.