Posted on April 19, 2013 by theonceandfutureemptynest

It’s spring. Bulbs are popping up. I have crocuses in my yard. As I drive through town, I see brilliant bushes of wisteria, flowering dogwood and daffodils. Robins hop on my lawn. Cardinals flitter in the tree branches. The world is bright with color. Spring has arrived. So have the April showers. Sunshine is still a fleeting thing.

I went in for my annual physical. I learned I had bursitis. That just sounds like an old person’s disease. It sounds like something a Dickens character would have so we would all know how old, decadent and decrepit he was. And I have it. Occasionally when something brushes up against my knee, I howl with pain. My joints are failing me. The doctor gave me advice on how to treat my knee but he did not say that I had to give up running or cycling. So I did both this week. I have my mile time down to nine minutes. Not as fast as when I was much younger but a good speed. This morning I did six miles in less than an hour—54 minutes. I don’t feel old. Only when I look in the mirror do I remember that I am now closer to decade number six than any other decade. 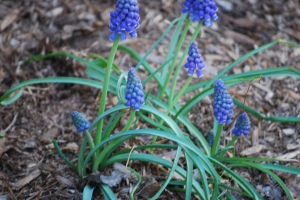 I ran those miles this gray, overcast morning because I was upset. The doctor’s office called and said my blood work indicated that I had a vitamin D deficiency. Really? I’m outside all the time, even in the snow. I drink milk and eat yogurt daily. “This is to be expected in a woman your age,” said the nurse calmly. A woman my age? My age? “You have to take a supplement; you can’t get enough from your food.” I could get more if the sun shone! 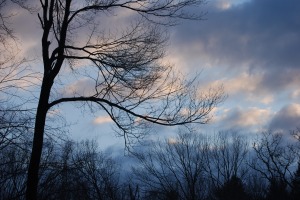 Evidently I didn’t store up enough vitamin D when I was getting sunburned in Hawaii in January. Evidently I needed a longer vacation. And even though I was out in the sun, running, snowshoeing, shoveling, my skin didn’t get enough sunshine because I was wearing a hat, gloves, a parka, long pants, high ski boots, and sunscreen. Maybe the sun was too far away.

So this afternoon I started sunshine pills.  It’s like a science fiction story.  With the right supplements, one can live underground and still be tan, blond and fit.  Someday science will have it down to just one pill.  Me, I’m waiting for the sun.

Transitions! Every couple has them: First newlyweds; then parents, then empty nesters. After raising three girls, our nest was empty--just my husband, myself, and three dogs. I taught English to middle school and high school students; my husband was a corporate drudge. Life was good. We went on vacations, had romantic dinners, and enjoyed the peace and quiet. Then a daughter came home. We relocated from California to Connecticut and found ourselves on new adventures.
View all posts by theonceandfutureemptynest →
This entry was posted in Aging, everyday life, running, weather and tagged old age, running, sunshine, Vitamin D. Bookmark the permalink.