Posted on February 9, 2013 by theonceandfutureemptynest

Today the world is blanketed in white. Yesterday and early this morning, we were buried in slightly more than two feet of snow, thanks to the winter storm, Nemo. All the contours of my yard have been erased. All that is left is whiteness. Suddenly the familiar has become the unfamiliar. The world is pristine. 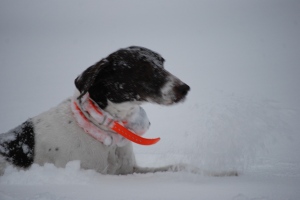 The storm started mildly. I went for a morning run around the neighborhood with three of the dogs. Snow began to fall lightly. I saw five other runners but only two cars. People were settling in for the storm. On my return I stretched in front of the fire. My husband worked from home. The two of us sat in our office, working but not talking, except for occasional comments about the snow. Periodically I would take the dogs out. By late evening, the snow was piled around the doors. For the first time, I understood why the side garage door was slightly elevated. We had a fire in the family room, where we watched TV and listened to the wind. The heaviest snow fell while we were sleeping.

There is something miraculous about waking up and finding yourself in a new world. At four in the morning, I looked out the window at a moonlit yard, shimmering under its snow coverlet. My truck was almost buried. A bird statue on an elevated flower bed no longer had legs. My first thought was that I should not have left my snowshoes in the truck. How was I going to take the dogs out? I went back to sleep. Tomorrow is another . . . but I didn’t sleep that long.

In the morning I slipped snowboarding pants over my skinny jeans, put on my snow boots and parka. I grabbed my camera and my truck keys and let the dogs out. They hesitated at the garage door. The female pointer, Princess, leapt out first. She struggled in the snow much like she was swimming. Dude loves swimming. He plunged into the snow and took off into the woods. Peanut followed in his wake. The beagle refused to go out. My daughter’s boyfriend began shoveling the walkway next to the garage in an effort to uncover the snow blower. I waded out into the snow, making my way to the truck.

Once I had the snowshoes on, walking was easier. I still sunk, but not as far. I slowly trudged out to the street. Peanut and Dude, my faithful followers, came along, partly because they love routine and partly because they need to patrol the perimeter. Dude forged his own route while Peanut followed behind me. The world outside my yard was quiet. The street had not been plowed. No one else was out. I found a sense of peace in the aftermath of this storm.

My husband and daughter’s boyfriend spent most of the day clearing the driveway and deck. My snowshoe path created some difficulty for the snow blower. Because the path was narrower than the snow blower, because I had packed it down with the snow shoes, the path became an obstacle for the blower. I had to promise that the next time I would hike next to the driveway, not on it.

By midafternoon, the sun was shining brightly. The driveway was unobstructed. The deck was clear. The street was plowed. I stood in the middle of the street with Peanut and Dude and talked to my neighbor. My house glistened in the sunshine. 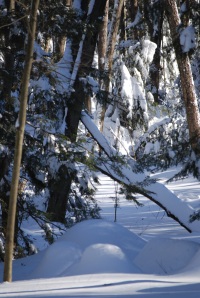 I may not be on a beach somewhere but I am home. And I delight in finding a new world right outside my doorstep.

Transitions! Every couple has them: First newlyweds; then parents, then empty nesters. After raising three girls, our nest was empty--just my husband, myself, and three dogs. I taught English to middle school and high school students; my husband was a corporate drudge. Life was good. We went on vacations, had romantic dinners, and enjoyed the peace and quiet. Then a daughter came home. We relocated from California to Connecticut and found ourselves on new adventures.
View all posts by theonceandfutureemptynest →
This entry was posted in backyards, everyday life, Life in Connecticut, snow, storms and tagged blizzards, dogs, snow, snowshoes, storms. Bookmark the permalink.