And May All Your Christmases be . . .Sunny!

Posted on December 27, 2012 by theonceandfutureemptynest

Our first Christmas in Connecticut was white.  Christmas morning a light snow was falling as we opened gifts.  It was just like being in a Christmas movie, cheerful adults opening gifts, happy baby ripping up wrapping paper, snow falling so the trees in the woods were dusted.  We got just enough snow that my grandson could go for a ride on the sled my parents gave him.  The next day was chilly but the sun shone most of the day.  We did some sightseeing with my middle daughter, her partner and her partner’s father.  Then the snow came.  We sat by the fire and enjoyed the snow until my husband decided that enough snow had fallen for him to use the snow blower.

Using the snow blower is still a novelty.  My husband cleared our long driveway in three passes, quickly and efficiently.  But our snow blower is supersized.  It cannot do the walkway in front of the house because it is too heavy to pull up the steps.  The walkway has to be done by hand.  The deck too.  I did the front walkway last night and then scattered some salt.  I wanted to put salt down on the walkway from the driveway to the side garage door but my husband said I was wasting salt.  In the morning, the front walk was merely dusted with new snow, but the one to the garage was slightly icy.  The dogs go in and out of the garage.  I am learning.

When we tell people we’re from California, they always ask:  “How do you like the snow?”  We casually reply: “We’re skiers.” (I’m not a skier but why explain that this old lady prefers to snowboard.)  We like snow.  We like to go to the ski areas.  But going to the snow to play is not the same as living in a place where it snows. 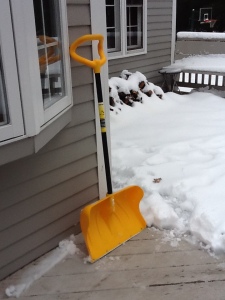 Experiencing snow on a vacation is cool.  Someone has cleared the roads before your arrival.  Someone clears the walkways from the hotel or parking lot to the lift area.  And you want to be there.  Last year we lived in a motel in January and February while waiting for our house to close escrow.  I watched the few snow storms we had from our window and then ran down with my camera once the storm let up.  Someone else cleared the parking lot and the walkways.  I sipped hot tea and watched.  Now the someone is me.

This morning I hiked down to the end of our driveway to find that the road with just one house on it was plowed but our street was not.  A moment later, our street was plowed, but my driveway entrance and trash can were buried.  Down I hiked to get my snow shovel.  I dug out the trash can and cleared the driveway.  The Hartford Courant delivery person apologized that the paper was late but since our road wasn’t plowed  . . .   “No problem,” I tell him as I slip the paper into a large pocket on my parka.  But the paper fell out when I bent down so I hiked back down the driveway to put it in the house.  This was quite a workout without the shoveling. 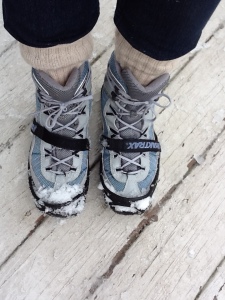 I woke up earlier to the Weather Channel announcing that today was supposed to be warm—37 degrees.  Any precipitation would be sleet or rain so after I finished the driveway, I was inclined to go back inside to read the newspaper and drink coffee.  But I hesitated.  In the late afternoon, the slush would freeze if not treated.  If not treated.  Key words.  I knew what that meant.  I needed to spread salt and to spread salt, I needed to shovel snow.   So I shoveled the walkways again.  I shoveled the area in front to the garage doors.  I shoveled the deck.   And then I spread salt.  This is a workout: lifting fifty pound bags of salt, throwing shovels of snow over the railing, scraping the ice, balancing on the Yaktracks I slipped over my snowboots.  I spent three hours clearing snow.  At the end of the day, my shoulders ache; my legs feel like I ran ten miles and then did squats.  I am exhausted.

Winter officially started six days ago.  I think it is going to be a long one . . .

Transitions! Every couple has them: First newlyweds; then parents, then empty nesters. After raising three girls, our nest was empty--just my husband, myself, and three dogs. I taught English to middle school and high school students; my husband was a corporate drudge. Life was good. We went on vacations, had romantic dinners, and enjoyed the peace and quiet. Then a daughter came home. We relocated from California to Connecticut and found ourselves on new adventures.
View all posts by theonceandfutureemptynest →
This entry was posted in backyards, everyday life, Life in Connecticut, New England, snow, transitions, Uncategorized and tagged life in Connecticut, snow, snow blowers, snow removal, winter. Bookmark the permalink.

2 Responses to And May All Your Christmases be . . .Sunny!