Posted on August 9, 2012 by theonceandfutureemptynest

The sports news yesterday in Connecticut was not the Olympics.  In case you missed it, Jim Calhoun, legendary UConn basketball coach, went home after hip surgery.   The Hartford Courant ran two stories on Calhoun’s discharge from the hospital, one in the sports section, the other by humorist, Jim Shea.  Anything regarding UConn basketball is big news here.  This time I was intrigued, not because Calhoun said that this would not affect his future plans, that he would be following UConn recruitment efforts from home, but because of how he broke his hip.   Calhoun, now 70, broke his hip when his road bicycle hit a patch of sand.  I’m impressed.  At a time when I dread aging, I fear being unable to run, to cycle, to kayak, to snowboard, Mr. Calhoun is a beacon of hope.

At the age of 70, three years after he broke several ribs cycling, Mr. Calhoun was still riding his bike.  Some people would stop cycling after a broken rib.  A few years ago, I caught an edge while turning on my snowboard and fell.  For a moment, I couldn’t breathe; then when I could, every breath was an icy knife.  Of course, I rode down to the chairlift and went back up to do that same run again (which is what I also did after I sprained my ankle, after I traumatized my knee. . .).  But a few days later, still in pain, I made my way to urgent care just to be sure that I hadn’t broken a rib.  Nothing showed up on the x-ray.  So if bruised ribs hurt, how much more painful are broken ones?  When my husband pulverized his collar bone so badly that it had to be wired back together (BTW: he did this skiing, see a family pattern?), he complained about the pain of his broken rib, not the collar bone. So I admire Mr. Calhoun for getting back on his bike after breaking his ribs and I am inspired by him planning to get back on his bike after breaking his hip.  Mr. Calhoun is a survivor—two bouts of cancer and three NCAA championships.  He must eat stress for breakfast.

So the question I have is what drives people like Mr. Calhoun to get up after a fall and keep riding?  I don’t just mean this physically, but mentally.  How does one keep the wolves of fear away?  A lessor person might have given up his bike after the first fall or, at least, as Jim Shea suggested in his August 8 column in the Hartford Courant, switch from a road bike to a more stable hybrid or mountain bike.  Why do some people keep going?  Why I am still running when I know that I have arthritis in my feet?  Why  not just walk?  When I brought my road bike in for a tune up at a new bike store, the salesperson suggested I might be more comfortable on a woman’s bike and at my age, I might be happier on a hybrid.   I am still on my road bike.  While I am younger than Mr. Calhoun, I have a very cautious nature.  I prefer bike trails to streets.  When I was forced to leave the trail because of tree trimming and ride on the highway this morning, I held my breath at first and muttered:  “Three feet, three feet.”  After the first two cars passed by, I found riding on the road wasn’t so scary and stayed there when I could have gone back to the bike trail.  I am a hesitant risk taker.  A college basketball coach needs to be a decisive one.

Adversity is a roadblock in life.  Some of us face it with confidence; others avoid risk and thus avoid difficulty.  When I was younger, I lacked confidence.  I feared rejection.  I took the bike trails of life rather than ride on the road.  I have veered off the trail and on to the highway.  I miss the safety of the trail (teaching) but I am enjoying the hairpin curves of writing a novel.  We are never too old to pursue what we love or to keep doing what we love.  Perhaps this is why Mr. Calhoun is still coaching.

Life is fraught with dangers, physical and mental.  Every time one gets on a bike, one takes a risk.  We take a risk just getting out of bed in the morning.  But should we stay in bed afraid?  I look to others for inspiration.  While I could not manage to follow his advice in The Seven Habits of Highly Effective People, I still admire the author, Steven Covey, whose death at the age of 79 was attributed to a bike accident.   I have to believe that he enjoyed life.

Is there a secret to enjoying life?  Why do some people continue to work, to perform, while others relegate themselves to the sidelines?   The poet Donald Hall, the essayist Joan Didion, the novelist Joyce Carol Oates, are all still writing.   Jim Calhoun is still coaching.  What gives them the energy to create?  To plan?   I need to know.   I am not ready to sit on the sidelines.

People like Mr. Calhoun live life to its fullest.  They have not a fear of death, but instead have a joy of life.  What good is life if you can’t enjoy it? 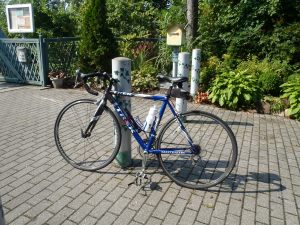 Transitions! Every couple has them: First newlyweds; then parents, then empty nesters. After raising three girls, our nest was empty--just my husband, myself, and three dogs. I taught English to middle school and high school students; my husband was a corporate drudge. Life was good. We went on vacations, had romantic dinners, and enjoyed the peace and quiet. Then a daughter came home. We relocated from California to Connecticut and found ourselves on new adventures.
View all posts by theonceandfutureemptynest →
This entry was posted in adventures, Aging, changes, cycling, everyday life, Life in Connecticut, transitions and tagged aging, cycling, enjoying life, growing old, heros, Jim Calhoun, taking risks, transitions, UConn. Bookmark the permalink.

1 Response to A Cycling Hero