Tranquility and the Sport of Running

Posted on July 25, 2012 by theonceandfutureemptynest 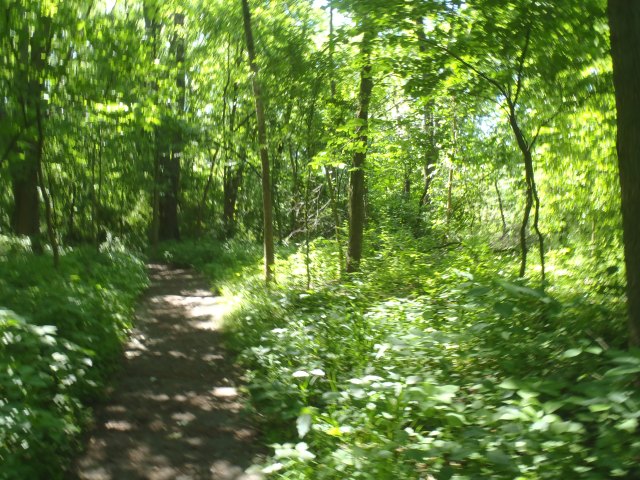 Running along the narrow path between the trees along the river, I feel something spiritual yet primitive.  These are feelings that I cannot accurately label.  I feel my feet hit the path; I hear the leaves moving as the dogs and I brush against them.  I watch the squirrels scatter before us.  Birds call warnings to each other before taking flight.   The sun comes through the tree canopy, dappling the forest floor, reminding me of the stain glass windows in my childhood church.  This is a cathedral.  Here I find my peace.

In my California life, I ran on the streets around my house.  For a brief period, I ran on the access roads under the power lines about a mile from my house.  I liked running along the dirt roads, up and down the hills, watching for roadrunners and jackrabbits.   Then one day I felt unsafe.  I couldn’t tell you why.  Nothing happened.  So I stopped running there.  For a while I ran the cross country circuit at Central Park (not the one in NYC).  I would take my dogs to the dog park and then we would lap the circuit, usually twice.  I got my last teaching gig while running there.  A principal called me just a few days before school started.  I cut my run short that day.  Central Park was pleasant but so suburban with its baseball diamonds and soccer fields.  It wasn’t true trail running, not like the trails I did on camping trips.

A mile from my house was a bike trail that went along one of the last natural rivers in Southern California.  Most of the time, the river bed is a dry, sandy gulch of cacti, sage and small trees.  Occasionally we would walk our dogs off leash there but I would never go alone and my husband doesn’t run. Running along the bike trail wasn’t practical.  While it was designated a multi-use trail, some cyclists were rude to the runners and pedestrians.  Even though I don’t use more than a lane, I am more than willing to step off the trail for cyclists, especially since I run with dogs, but parts of the trail had very little space for that.  I cycled there but seldom ran on it.

Now in Connecticut, I find myself running on trails more than on pavement.  The bike trail a mile from my Connecticut house has a path alongside that is utilized by runners.  (The cyclists seem better natured but that may be my imagination.) In a few places, the path disappears, choked by wildflowers or poison ivy but then it reappears.   My knees and feet are thankful for the dirt path.   My skin is thankful for the tree canopy that shades the trail.  But even though this trail is readily accessible by jogging down the street and through an apartment complex, I find myself loading the dogs into the truck once or twice a week to run at Fisher Meadows.

The pond at Fisher Meadows

Fisher Meadows is less than two miles from the house—two stop signs.  It takes me less time to get there than it took me to get to the gym in California (about the same distance).  There I can run on a dirt road through the meadows, around the pond, and back.  But what I really like is the trails that run along the river.

Moving from the road to the trail is like stepping into another world.  I run through the trees and think about other people who may have walked or ran through here, the first Puritan settlers or the Tunxis.  Did they fish from the banks?  Hunt the squirrels?  I watch for otters.  I am not far from civilization.  Across the river are houses.  I wonder about those.  Have the owners seen the photos from the 1955 flood?  But I am alone with the dogs and we are moving through the trees. 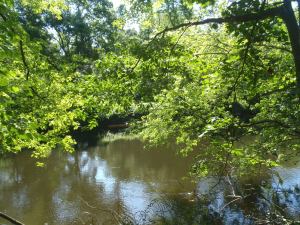 A few miles away, a ten minute drive, I can let the dogs off leash in a wildlife management area.  I sometimes run there but it is open fields, creeks, and ponds, a landscape more green than the hills of southern California but not wooded.  It doesn’t call me the way that the forest does.

The beach used to call me this way.  All through my undergraduate years, I ran along the coast, watching the waves, the seagulls, the brown pelicans.  I ran almost every day—sun, fog, storms, high tide, low tide.  Little chunks of tar would cling to my feet but still I ran.  In the stress of those college days, running along the beach brought me peace.  I found solutions to my problems, the opening lines of an essay, an image for a poem.   I still find solace at the beach.   Perhaps it is the river that calls me and not the trees. 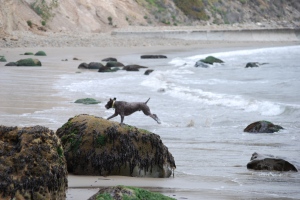 Running itself brings me tranquility.  For years I rose at five am in order to run at least three miles before work.  Exercising at the beginning of the day made me more alert, more energetic, more enthusiastic the rest of the day.  I need my run.  However, I have been running for over half a century, how much longer can I run?  After I hurt my knee this spring, I feared my running days were almost over.  A month later I was back—slow, cautious but running.  I still need to add in some fast walking to recover once or twice in my run but I continue—on arthritic feet and old knees, wearing trail runners with Superfeet insoles.  I could swim instead.  I have been cycling more (on the same bike trail that I run) but running on the trail along the river brings me more serenity than any other place.

I cannot explain why I find such peace in the woods.  I just know that in the hectic demands of my household, I need this. And when I am there, I think that this is where I belong—among the trees.  I do wonder:  what am I going to do in the winter?

Transitions! Every couple has them: First newlyweds; then parents, then empty nesters. After raising three girls, our nest was empty--just my husband, myself, and three dogs. I taught English to middle school and high school students; my husband was a corporate drudge. Life was good. We went on vacations, had romantic dinners, and enjoyed the peace and quiet. Then a daughter came home. We relocated from California to Connecticut and found ourselves on new adventures.
View all posts by theonceandfutureemptynest →
This entry was posted in adventures, Aging, changes, everyday life, Life in Connecticut, moving, nature, running, transitions, Uncategorized and tagged aging, changes, Connecticut, running. Bookmark the permalink.