Bobcats, horses, and bears! Oh my!

Posted on June 12, 2012 by theonceandfutureemptynest 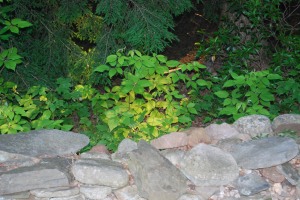 Toto, I don’t think we are in California anymore.  Sunday brought some new challenges to our dogs and some special wonder to us.

The dogs and I got up at 6:30 am because they had to use the bathroom.  I tried to get them to use mine, but they think the toilet is a drinking dish.  So out we went while the rest of the house slept in.  We hiked up to the mailbox to get the paper.  The local paper was there, but the New York Times wasn’t.  We went back for breakfast.  I had a cup of coffee, and then took some photos for a blog on mornings that I am thinking about.  The dogs were ready for a nap, but it’s Sunday, I need the Times.  We hike back to the mailbox.  The dogs race up and down the driveway, distracted by smells and squirrels.  Back in the house, I set the Times down in the living room and go into the kitchen for coffee.  Peanut is barking.  He and Dude are in the sunroom where he is standing on the back of a sofa, staring out the window, barking incessantly.    Everyone in the house is asleep, including the baby.  I am working on the barking problem so I go into the sunroom and pick up Peanut.  Dude is standing at the window, dancing.  Suddenly the beagle howls.  Something is out there.

Something emerges from behind our wood shed.  Bigger than the beagle, but not as big as Princess, my forty-seven pound Pointer, a tawny bobcat stalks along the path.  He stops and stares at the sunroom, flicking his black tufted ears.  This is not a lion; nor is it a housecat.  I am impressed as the tawny feline prowls along the driveway.  All the dogs watch, only the beagle baying.  My cell phone and camera are in the kitchen and if I leave, the bobcat will be gone.  I hold Peanut and watch.

A moment later I have poured my coffee, I am almost to the living room when the wild dog ruckus erupts again.  The front doorbell rings.  The girl next door tells me that she saw Buddy running down the street.  Twelve pound dog.  Thirty-five plus bobcat?  How did Buddy get out?  I race upstairs to see if Buddy is with my daughter.  She’s asleep.  Buddy is on the floor.  Race back down to tell my neighbor, “You must have seen the bobcat.”  “Bobcat?”  “Shall I walk you home?” On the way up my driveway, she tells me that the bobcat is not as scary as a bear.  Last year she saw a bear with two cubs.

The calm before the rumpus

The morning isn’t quite over.  My husband is outside on our deck, assembling my birthday bar-b-que with my dad’s help.  The dogs are all in the yard, on squirrel patrol.  I am inside the house when the wild mêlée begins.  When I walk out, my daughter yells “horses”; my husband is calling the dogs.  The beagle and Princess are heading back to the deck.  Dude starts for the deck, then turns back to the forest, quivering with anticipation.  Buddy and Peanut are running a circle, into the leaves, back onto the lawn, into the leaves, barking, barking, barking.  They are not responding to any commands.  On the path, in the trees, are two uniformed horsemen, members of the First Company Governor’s Horse Guard, a state militia.  Clearly the second horse is spooked.  The first one isn’t happy either.  The dark bay is prancing; his rider holding him in.  Everyone is giving commands, but the dogs are not listening.  I enter the chaos without assessing the situation and clearly make things worse, trying to grab Dude’s collar when he’s finally responding to my husband’s commands.  Peanut eludes my grasp.  All the while, I’m thinking:  “I’m not dressed for company.”  Somehow the dogs are in the house, and the horses proceed down the driveway.  The lead rider beckons.  We talk about how to communicate so I will know they are on patrol and keep the dogs in.   My neighbors tell me that the driveway itself was once a carriage path.  I’m not sure that this is true but a faint trail does run behind the house and the cavalry has a right to use my driveway.  “We don’t have to go on the driveway,” the lead rider tells me, but I tell him that I do have a really big pooper scooper.  As they leave, I realize that I missed another great photo.  And my dogs need better training.

That evening I’m on the deck with my parents, having a cocktail, enjoying the evening.  We can hear the faint sounds of a neighbor’s graduation party.  Dude is lying on the grass, intently watching the woods.  He often sits or stands at the end of our grass and stares into the trees.  Princess goes to stand next to him and begins to softly “woof.”  This is not her “someone is at the door” bark.  This is a deep soft single syllable with long pauses.  She often does this when deer are near.  Peanut begins to bark.  I scoop up Peanut and he becomes quiet.  I step to the edge of the woods, expecting to see deer or a teen refugee from the party.  I hear twigs breaking.  Then I see him, a black bear, ambling through the brush.  I have never been so close to a bear in the wild.  Although I hike in the Sierras every summer, I have only seen a bear in the wild in Yosemite.  This one is close, but he seems oblivious to me.  “House!” I tell the dogs.  “House, house.”  The dogs all race to the deck. I carry Peanut.  I don’t dare put him down.  My mom opens the door.  “Get in the house,” I tell my parents.  Right behind me the bear ambles onto the lawn. 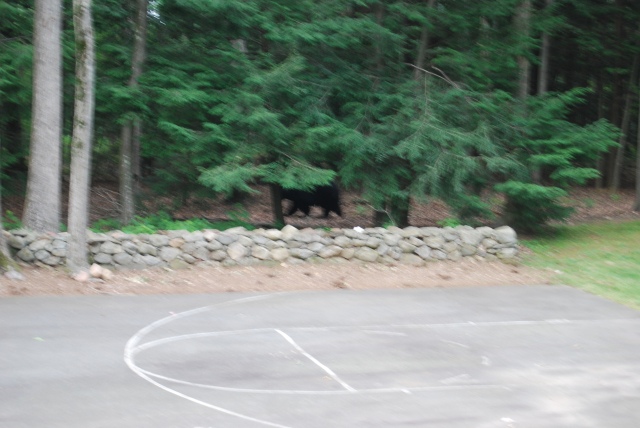 All the people crowd the bay window in the kitchen.  The dogs are quiet.  My daughter calls her boyfriend to come see.  My husband is working upstairs on something for his office; he does not come down.  I set Peanut on the floor and grab my camera.  The camera lens is not good for distance so I step out on the deck.  I’m still too far,  because the bear is now by the basketball court.  I walk out.  I know this is a stupid thing to do but I really want a shot.  Daughter’s boyfriend is right behind me as I leave the deck.  “You know that bear can outrun you, right?”  he asks.  I nod, but I’m thinking: “I can out sprint you, bear bait.”  I don’t go too close and the bear is moving faster than I thought.  I end up with three photos of either a bear or Big Foot on the other side of my “mending” wall.

Later my husband asks:  “What was that commotion earlier?”  He has now missed the fox (in March); the bobcat, the turkeys, and the bear.  He works too hard.

Every morning before I release the dogs, I scan the yard for foxes and deer.  Now I check for bobcats and bears.  I know to expect coyotes as well.  We share our habitat with many creatures.  The large lots, the tradition of leaving part of your yard natural for privacy, and the habit of dumping leaves and garden debris in this wooded area has created a natural wildlife corridor.  My house is less than two miles from a large meadow area along the Farmington River.   While I have not seen large animals when hiking there, I have seen otters, squirrels, and chipmunks.  I have seen the footprints and scat of larger animals.  I am minutes from shopping, medical offices, the gym and yet I am on the edge of this animal highway, enjoying the noise and the view.

Transitions! Every couple has them: First newlyweds; then parents, then empty nesters. After raising three girls, our nest was empty--just my husband, myself, and three dogs. I taught English to middle school and high school students; my husband was a corporate drudge. Life was good. We went on vacations, had romantic dinners, and enjoyed the peace and quiet. Then a daughter came home. We relocated from California to Connecticut and found ourselves on new adventures.
View all posts by theonceandfutureemptynest →
This entry was posted in backyards, changes, dogs, everyday life, nature, New England, transitions, wildlife and tagged bears, bobcats, Connecticut, dogs, horses, nature. Bookmark the permalink.

2 Responses to Bobcats, horses, and bears! Oh my!