Posted on June 8, 2012 by theonceandfutureemptynest

This is my grandson’s chair: 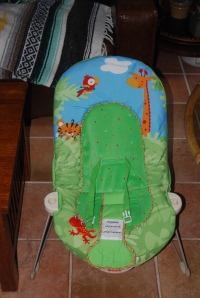 This is the dog that sat in the chair and smashed it: 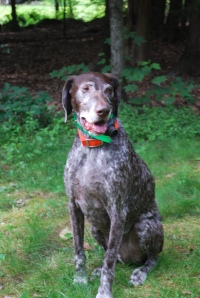 This dog is only seven. He just looks old.

An almost 70 pound German Shorthair Pointer.  Why?  Perhaps because he was mad at me for locking them all in the sunroom when the cable guy came.  Perhaps because the other dogs wouldn’t let him on the couch.

Perhaps because he thought it was the seat of power and the baby was usurping his spot as top dog.  Or maybe he just thought it looked comfortable.  Who knows what Dude is thinking?  My 82 year old father pulled the chair back into shape but it still doesn’t sit right so I had to buy another.  Life with a pack of dogs is never dull. 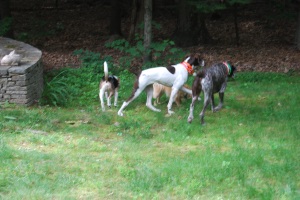 We have too many dogs.  First we had the replacement children, a nice hunting pack (2 GSPs and a beagle) and then my daughter moved back with a poufy little chi-pom, Peanut, who now thinks he’s my guard dog.  He sleeps at my feet and barks incessantly at anyone who comes near me.  He also lets me know when my parents venture out of the basement.

If he’s not with me, then he’s perched in the sunroom, guarding the house from intruders—turkeys, chipmunks, squirrels.  Four is not enough.  My daughter’s boyfriend moved back in (temporarily, for a month at most, but almost two months later, he’s still here), bringing his Shih Tzu/Chihuahua, who has confused indoors and outdoors on more than one occasion.   This dog, Buddy, also thinks that he’s a guard dog.  He protects the boyfriend, but when the boyfriend goes to work, the dog guards my daughter, and if she leaves, he guards the baby.  If they all go out, he mopes in the sunroom.

If the dogs were human children, we would worry that they are stressed.  They have undergone so many changes in the past six months.  They moved cross country, sharing our travel trailer with cats.  They lived in a kennel for a month (while the cats got to live in the hotel).  They moved into a great new home that smelled like another dog.  To make things worse, the cats got there first and claimed the best rooms.  They have no fenced yard so they had to learn boundaries.  Then the baby came.  And my parents came.  And the squirrels and chipmunks came out of hiding.  But they have everything under control.

They chase the squirrels when I let them out.  They lick the baby’s face when he sits in his chair.  They still bark at my parents but they follow my dad around in the hope that he will take them outside.   And they sleep.  We go for walks even though the yard is big because a change of scenery is nice.   They wait patiently for breakfast and dinner and hope for treats in between.  If I yell at them, they tuck their tails between their legs and then forgive me.

The lessons that dogs teach . . .priceless.

Transitions! Every couple has them: First newlyweds; then parents, then empty nesters. After raising three girls, our nest was empty--just my husband, myself, and three dogs. I taught English to middle school and high school students; my husband was a corporate drudge. Life was good. We went on vacations, had romantic dinners, and enjoyed the peace and quiet. Then a daughter came home. We relocated from California to Connecticut and found ourselves on new adventures.
View all posts by theonceandfutureemptynest →
This entry was posted in changes, dogs, everyday life, Family, lessons in life, moving, nature, relationships, transitions and tagged dogs, family, life lessons, moving, relationships, stress. Bookmark the permalink.

1 Response to Life with Dogs