Posted on May 10, 2012 by theonceandfutureemptynest

After the movers came and went, after we said our good byes to neighbors and friends, after we spent one last night in the house where we had lived for twenty-one years,  we put the dogs in the truck, secured the cat crates in the travel trailer, checked the brake lights and headed out, a modern wagon train east.

We left a little later than my husband had hoped, but there are apps for finding campgrounds and we were armed with all the modern conveniences that anyone could possibly need.  Riding shotgun did not have the same connotations as it did for the pioneers.  I wasn’t looking out for dangers, but for interesting sights as we made our way across the nation. I didn’t need a shotgun for dinner or marauders, just the Ipad with the nifty map app and a camera.  We left the LA area, heading out into the desert, following remnants of Route 66.  As we neared Needles, I realized that we were embarking on the route that my parents had driven when my family came to California.  The route that brought me into California in the mid-sixties would be the road that returned me to my New England roots.

As we cruised along the highway, I thought how crazy it would be to have six children sprawled in the back.  The four dogs were enough.  At night, when we set up camp, we exercised the dogs, made an easy to prepare dinner and relaxed, reading on our Kindles or watching TV.  We had all the conveniences of home in our portable apartment.  We usually drove until dark, found a spot, left in the morning.  The dogs, used to trailer trips, knew the routine.  The cats came up with their own routine, hiding in the bathroom at night, taking over my bed in the morning.  In contrast, my parents wrangled six hyper, verbal children across the country, not once but twice.

Like our trip, their cross country odysseys depended on routine.  They had put six sleepy children in the back of station wagon, loaded two trunks on the top of the car (I still have one), drove at least an hour before finding a place to stop for breakfast.  This was before Starbucks or McDonalds.  They tried to stop by late afternoon, choosing someplace with a pool.  Six children needed exercise.  We ate at drive-ins and diners where the food came out in plastic baskets.  Soda was a treat.  They crossed the country twice.  The first time they went from Idaho Falls, Idaho to Charleston, South Carolina.  I was seven (I turned eight in Cheyenne Wyoming, and lost my present a few days later in St. Louis); sister number four was a baby.  Disposable diapers existed but they were expensive and not very good (according to mom).  No car seats but we did have seatbelts.  We were dressed alike so they could keep track of us.  A year later they embarked on the trail to California, both trips courtesy of the US Navy.

The second trip started in Charleston, then to North Carolina, Tennesse, Arkansas, Texas, New Mexico, Arizona, and then California.  We reversed their route, until Tennesse when we traveled north to go through West Virginia, Virginia, Pennsylvania, New York , finally ending in Connecticut.  What I remember about the trip to California:  the hotel in North Carolina had paneled walls; once we got to Texas, mom worried about having drinking water in the car; Dad worried about having water for the car’s radiator; we (the kids) wanted to get something at the Indian Trading Posts next to every gas station along the way.  There were dolls, bow and arrow sets, feather headdresses and beaded purses but all I got was a tiny piece of petrified rock.  I tell my husband this as we drive through Arizona and New Mexico.  Suddenly we are in the parking lot of a modern gift store, one that looks like it sprung up from the ones almost fifty years ago.  A few photos.  A few jokes.  We step in to buy me something to remember the trip by.  I leave with a polished slap of petrified wood.  Some things never change.

Travel is a way to get to know someone better.  This is not our first journey cross country—we drove from Santa Barbara to Dayton, Ohio the first year we were married.  We didn’t have a dog then.  We had a cat in the back seat of our Toyota Corolla.  On the first day in Nevada, I worried that it was too hot to leave the cat in the car.  My husband told me that I was being overly cautious.  The cat would be fine.   We came back to the car and found the cat sprawled out on the seat, panting, an event that remains ammunition thirty-four years later.  We always grab a fast food lunch and hurry to the car to share it with the dogs.  If it is too hot, we take turns going in.  My husband will drive until there is nothing about fumes in the fuel tank; I would fill the tank every time it hits halfway.  As we climb the Rocky Mountains, the truck drinks fuel rapidly.  The light turns on, fifty miles.  Don’t worry says my husband as he watches the gauge drop in minutes.  He has one eye on the fuel gauge, the other on the road as gusty winds blow the truck and trailer. Out of nowhere, hail pounds us.   I look through the camera lens at the landscape as if that would change the situation, a different perspective.  We cruise into a truck stop on fumes.  We refuel more often the rest of the trip.  We now have an unspoken agreement.

Marriage is a series of compromises.  We married so young that we grew up together.  We weigh difficulties, desires and decisions together, but we don’t always agree on the weight.  I may find something more valuable than my husband; he may desire something I have no interest in.  While this road trip was the most expedient way of moving our livestock, it was a journey of assessment.   Six days on the road– over the Rockies, across the high plains, crossing the Mississippi, wandering through the Blue Ridge Mountains—gave us a chance to renew our friendship.  We drove through rain, hail, and sunshine.  We saw pronghorn grazing, watched deer running along some fields next to the Interstate, admired barns across the nation, but mostly we discovered how much we still had to say to each other.  The journey across the country led back to that September day we first committed to spend our lives together. 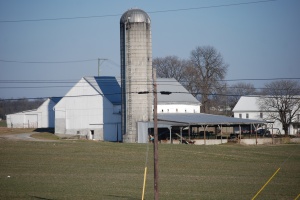 Transitions! Every couple has them: First newlyweds; then parents, then empty nesters. After raising three girls, our nest was empty--just my husband, myself, and three dogs. I taught English to middle school and high school students; my husband was a corporate drudge. Life was good. We went on vacations, had romantic dinners, and enjoyed the peace and quiet. Then a daughter came home. We relocated from California to Connecticut and found ourselves on new adventures.
View all posts by theonceandfutureemptynest →
This entry was posted in childhood memories, Family, marriage, moving, relationships, transitions, travel and tagged family, marriage, memories, relationships, transitions, travel. Bookmark the permalink.